The 11th edition of Sailing Arabia – The Tour, Oman’s premier offshore race, returns this week with teams representing Oman and Europe racing at four venues along the nation’s coastline in a combination of coastal raids and in-port races. Organised by Oman Sail, Sailing Arabia – The Tour has become a favourite for Omani sailors to gain vital experience and teams from colder climates to test themselves in warm conditions as the season comes to a close. 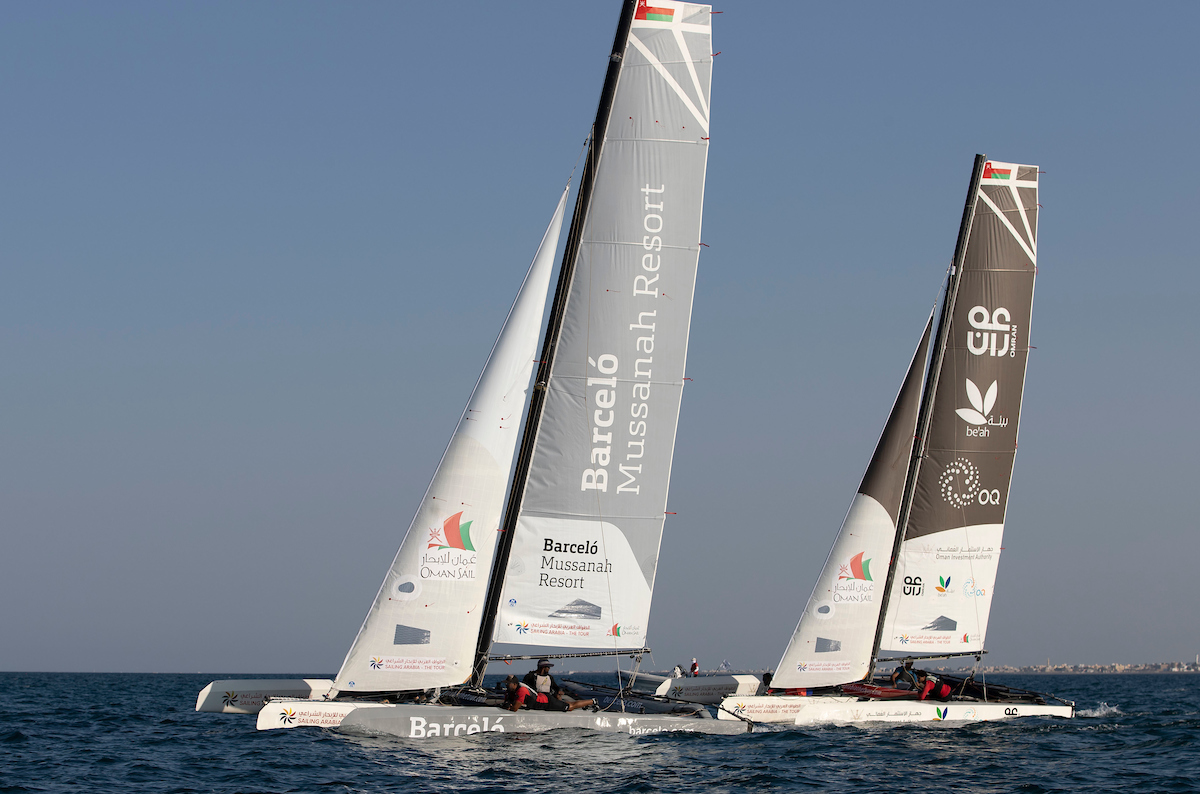 23rd November 2021. The 2021 edition of Sailing Arabia The Tour. Pictures of the race teams onboard their ‘Diam24” trimarans practicing prior to the start tomorrow
(Photo by Lloyd Images/ Oman Sail)

Beginning on 24 November 2021 at Barcelo Mussanah Resort, the route heads south to Sur then returns north to Marina Bandar Al Rowdha and then Muscat for the final leg. Each team poses a different challenge and the teams will have to contend with shifting sea breezes and a mix of short sprints and longer races to become the 2021 champion.

This year’s fleet features six teams representing five countries. The crews of Oman Investment Authority and Oman Sail will proudly fly the Omani flag, while a mixed all-Omani crew sailing on board DB Schenker will race under the German flag on behalf of the Tour’s official logistics partner. The mixed Omani-Spanish crew of Barcelo Mussanah Resort,  host venue for the opening ceremony and first two races, will represent a joint team representing Oman and Spain, an all-Italian crew from Nastro Rosa will represent Italy and a mixed crew representing Team France will race under the French flag.

Saleh Al Jabri, Project Manager and Acting Head of Sailing Events & Commercial at Oman Sail, said, “Sailing Arabia – The Tour is one of the most beloved events in Oman’s sailing calendar. For more than a decade we have welcomed some of the best teams to our waters to take on Omani sailors, share their diverse experience and learn from each other. This year’s fleet is incredibly strong with both male and female sailors, competing together under a variety of flags. We’re delighted to host The Tour once again this year and look forward to ten days of great sailing as we showcase the beauty of Oman’s coastline and world class facilities at each venue.”

The opening ceremony takes place at Barcelo Mussanah Resort on 23 November, with the first coastal raid and in-port race at the same venue the following day. The second leg takes place in Sur, a city synonymous with boatbuilding and sailing, on 27 November, the third on 1 December at Marina Bandar Al Rowdha, and the final races will be held at Al Mouj Muscat on 3 December with the prizegiving and closing ceremonies on 5 December.

Dermot Birchall, General Manager of Barceló Mussanah Resort says, “We are proud to be partnering with Oman Sail for this year’s sailing tour, and take pride in promoting the rekindling of the Sultanate’s maritime eminence as the premier international sailing destination in the region. The event will showcase the impressive wonders and cultural heritage of Oman and we as Barceló Hotel Group are honored to be a part of such an exemplary display of comradery, sailing sportsmanship and the breathtaking treasures of Oman.”

Since its first edition in 2011, Sailing Arabia – The Tour has grown in stature to become the region’s annual premier offshore race and a favourite winter destination for sailors around the globe. The 2018 event marked another milestone, with the introduction of DIAM24 as the official class, offering the race crews an exceptional experience.

Sailing Arabia – The Tour 2021 will be run in full adherence to the government of Oman’s latest COVID-19 safety protocols. More information about the event and instructions on how to register are available on the official website.