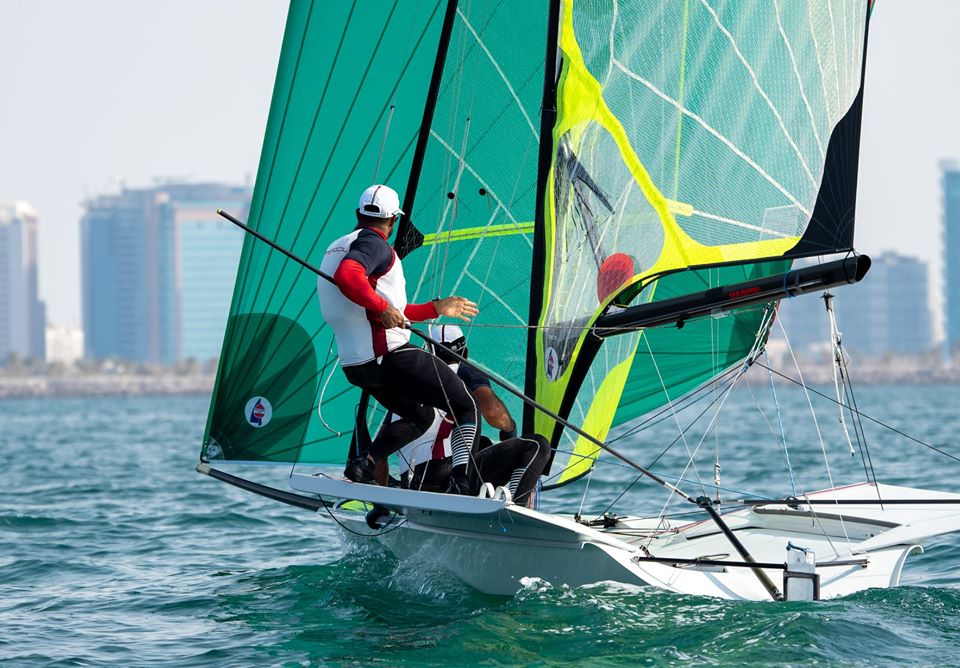 Muscat, November 26th 2019: Oman’s Musab al Hadi and Waleed al Kindi will take another step towards selection for Tokyo and making Olympic history during this week’s competition in New Zealand.

Fresh from winning gold at the 2019 Asian Championships, Omani 49er pair Musab Al Hadi and Waleed al Kindi are taking on some of the world’s best at the 2019 Oceania Championship in Auckland, New Zealand, which runs until Wednesday 27 November.

The pair are campaigning to become the first Omani sailors to represent the Sultanate at Olympic level, with the 2019 Oceania Championship a key part of their preparation for the Olympic Qualifiers in Abu Dhabi in March 2020.

It’s been so far so good for Musab and Waleed, with the path to Tokyo beginning with a strong win at last month’s 2019 Asian Championships in Abu Dhabi, the venue for the Olympic qualifiers in March.

Musab said: “We took a lot of confidence out of the result in Abu Dhabi. There is definitely a lot of work still to be done but we are really happy where we are as a team heading into the Oceania Championship.

“We’ve had a really great training period and we’ve both been enjoying the heavy conditions and solid breezes of Auckland Harbour.”

With Olympic spots on the line for some teams, the 2019 Oceania Championship has attracted a world class field, including New Zealand’s Peter Burling and Blair Tuke, and British 2017 49er world champions Dylan Fletcher and Stuart Bithell.

Waleed said: “The competition will be really tough here in Auckland. Everyone wants to earn a place in Tokyo so will be at the top of their games.

“But we are really excited to see how we measure up against some of the world’s best and believe if we continue to do what we have been doing in training then we can certainly come away with a result to be proud of. The experience here will also be a great foundation to build on for the World Championships later this month.”

Also representing Oman will be Ahmed Al Hasani and Abdulrahman Al Mashari, who both achieved strong results at the Asian Championships last month in Abu Dhabi.

For more information about Musab and Waleed and their path to Tokyo, visit the Oman Sail website.