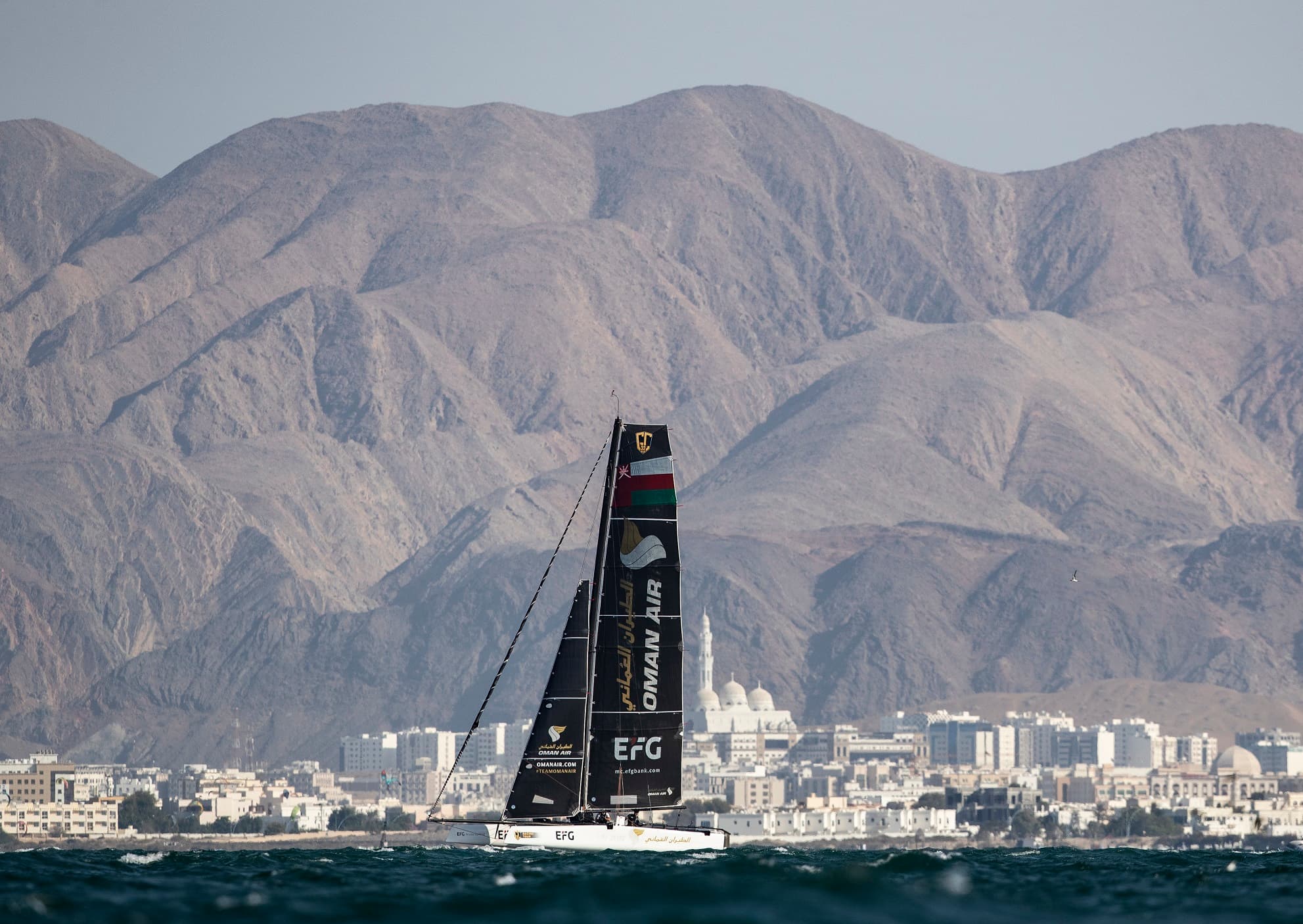 Muscat, 9th November 2019: The GC32 Racing Tour Oman Cup has been hailed as a great success, following exciting and highly competitive sailing in Muscat. In what was the final event of the 2019 GC32 Racing Tour season, the four days of racing off Al Mouj Marina in Muscat tested the fleet of international crews, with the initial light winds giving way to a strong breeze that saw the high-speed state-of-the-art foiling GC32 catamarans come alive.

Oman was the final stop on the tour, following events in Sardinia, Portugal, Spain, and Italy. Jointly organised by Oman Sail, the Oman Cup won praise from competitors and Racing Tour organisers alike for the delivery of the racing, the quality of facilities, and the warmth of the welcome.

“We’ve had wonderful weather – it got a bit windy towards the end but it was some very exciting racing and very positive. In November we struggle to find a nice place to go sailing in Europe so it is very nice to be able to come here into a venue where everything is set up and we have nice temperatures, warm water and nice sailing conditions. We thank Oman Sail and the Al Mouj Marina for their wonderful hospitality and for preparing such a great event.”

Flying the flag for local fans at the Oman Cup, Team Oman Air finished the 2019 GC32 Racing Tour season in second place overall, having won the Villasimius Cup in Sardinia and the Copa Del Rey Mapfre in Mallorca earlier in the season.

The team, made up of skipper Adam Minoprio, Pete Greenhalgh, Nasser Al Mashari, Stewart Dodson and James Wierzbowski, also won the last race of the Oman Cup to add to their earlier tally of three race victories on day three when they were the top scoring boat.

Team Oman Air crew member and local Omani sailor Nasser Al Mashari, “It’s always a pleasure being home and racing in front of friends and family. Unfortunately, we couldn’t get the result as a team but the level of competition was very high and it was a great way to end the season. Congratulations to Team Alinghi for the overall win.

“Muscat and Oman have really shone over the past week. All the teams have been impressed with the sailing conditions here and the sailors have really enjoyed learning more about Oman.”

Team Oman Air went into its home event, the Oman Cup, level on overall season points with Team Alinghi. However, the slick Swiss crew proved too strong and held on to top spot claim the GC32 Racing Tour title for 2019.

Held during Oman Sail’s 10th anniversary year, the GC32 Racing Tour Oman Cup is the latest in a series of high-profile international events hosted and managed by the organisation. These have included the America’s Cup World Series, the Extreme Sailing Series over several seasons, RS:X windsurfing and Laser World Championships, as well as EFG Sailing Arabia – The Tour.

Alongside its promotion of the sport of sailing through sailing schools and programmes, Oman Sail’s expertise in hosting international events was recognised when Oman Sail was awarded the President’s Development Award at last month’s World Sailing Awards.