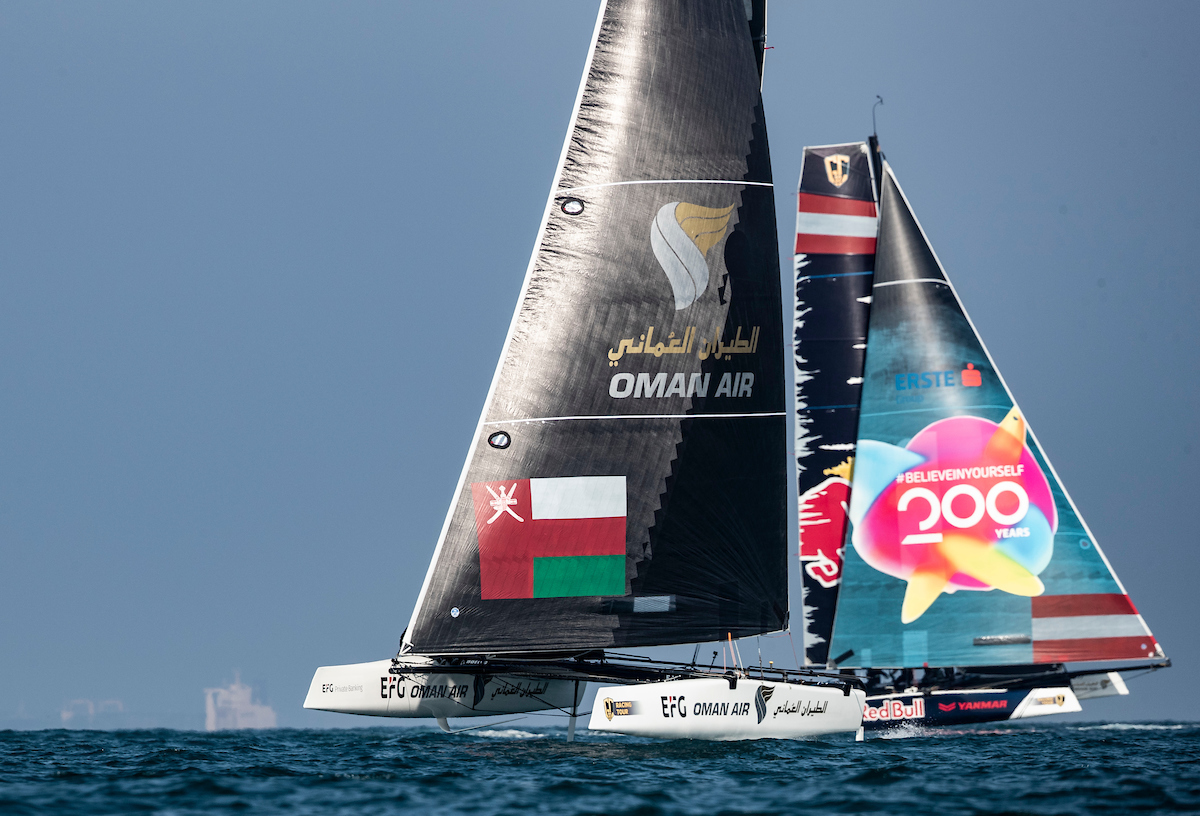 Team Oman Air is getting ready for a dramatic winner-takes-all showdown in Muscat that will decide the outcome of the 2019 GC32 Racing Tour title. Following a season long contest the Team Oman Air crew is neck-and-neck and level on points with the Swiss team Alinghi going into the GC32 Oman Cup finale after four hard-fought events racing the high-performance foiling catamarans.

With no other teams in contention on the overall standings, and with both Team Oman Air and Alinghi each having won two of the preceding regattas, the Oman Cup decider is a straightforward battle – whoever wins in Muscat takes the 2019 GC32 Racing Tour title.

Overall victory for the Oman Sail run racing team on home waters in early November would also be a fitting celebration marking the organisation’s 10th anniversary year. It is also their first season on the GC32 Tour following a move from the Extreme Sailing Series.

“Having the final event of the season in Muscat is a big deal for us,” said Peter Greenhalgh, a long-standing member of the Oman Sail project and Team Oman Air’s tactician and mainsail trimmer.

“Oman has been involved with the Extreme Sailing Series since 2009 and now the GC32 Tour, and Muscat has hosted various events but never the final, and never the final where we can win the entire circuit. Being Oman Sail’s 10th anniversary as well this year means that it will be a huge celebration if we can pull it off.”

And he added: “It’s a great milestone and a great goal for us to achieve, not only to have the final event in Oman but also to have put ourselves in a position where we can win the whole thing, so it couldn’t really be any better.”

The Oman Air team head into four days of racing off Al Mouj Marina having taken victories at the Villasimius Cup in Sardinia and Copa Del Rey Mapfre in Mallorca earlier in the season. The team also came within inches of winning the most recent event in September, finishing the GC32 Riva Cup on Lake Garda, Italy, level on points with arch-rival Alinghi and only missing out under the Tour’s tie-break rules.

The team is buoyed up by their performance throughout the year and delighted with the opportunity to celebrate the success of the Oman Sail project back at base, said Greenhalgh, who highlighted the role of his Omani crewmate Nasser Al Mashari .

“Nasser is a superb crew member and absolutely key to our performance in every way shape and form, and a great ambassador for Oman Sail and what they have achieved in those 10 years.”

The Oman Air team, however, have had to absorb one crew change in the run up to the Oman Cup, with skipper Adam Minoprio, Greenhalgh, Al Mashari and Stewart Dodson joined by former crewmate James Wierzbowski who is stepping back in for injured regular crew Adam Piggott.

The focus will now be on a few days of training before the start of racing, with hopes high that Muscat will deliver the spectacular sailing conditions it is known for.

Al Mashari said: “I’ve been honoured to sail and represent Oman in many beautiful places around the world, but there is nothing like returning to my home.

“Muscat and the Al Mouj Marina is a fantastic setting for the GC32 Oman Cup and all the teams will enjoy the great sailing conditions. I look forward to doing my friends, family members, and supporters proud. ”The GC32 Oman Cup will be held from November 5th to 9th with a day of practice racing leading into four days of high-intensity competition.