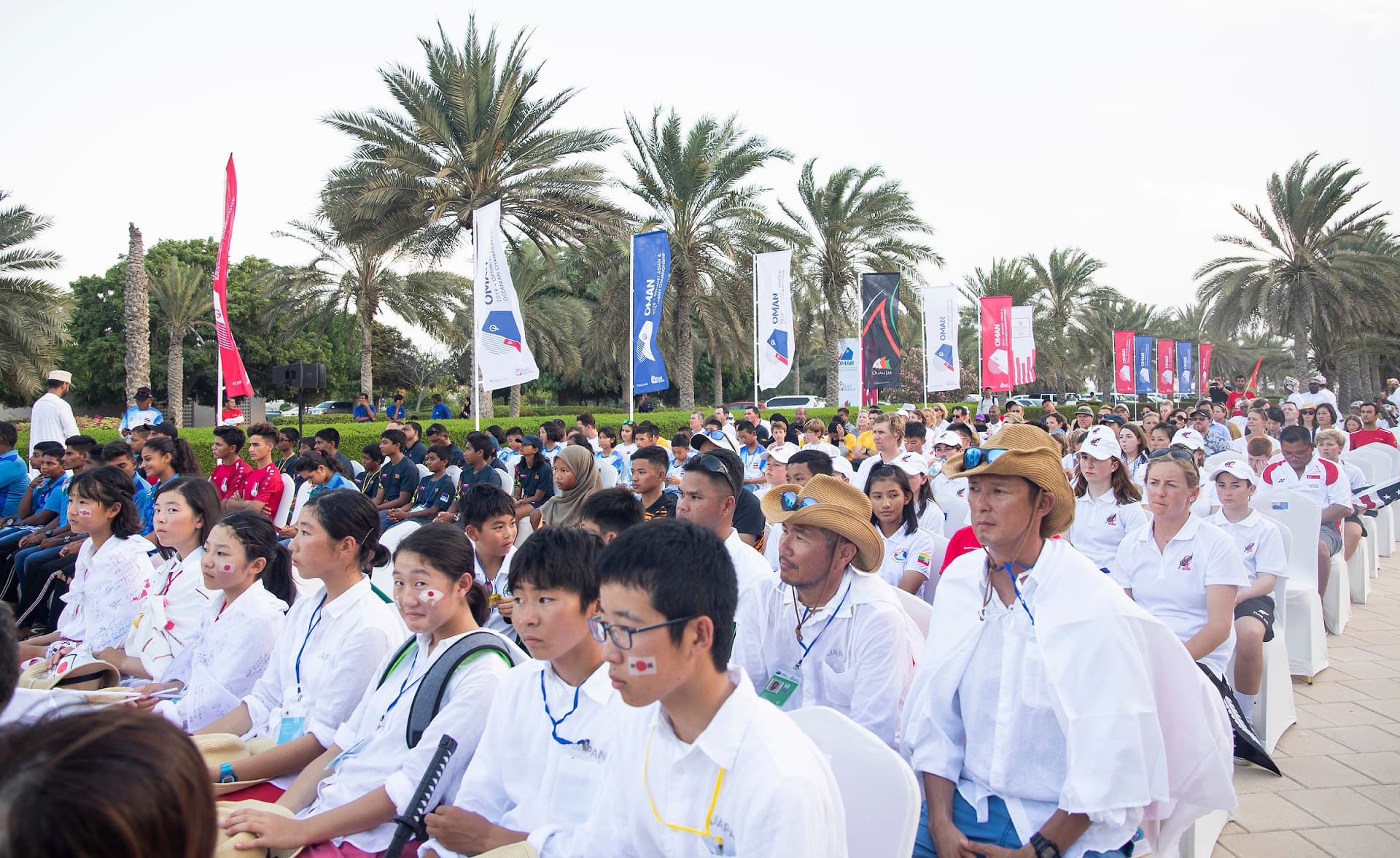 At Tuesday’s opening ceremony the national teams paraded and were then presented on stage in front of VIPs, the sailors’ coaches, family and friends, and guest of honour HE Maitha bint Saif al Mahrouqi, Undersecretary of the Ministry of Tourism and chairwomen of championship host and organiser Oman Sail.

Warmly welcoming the youth sailors IODA Vice President Ajay Narang said: “For the next few days you will experience some magical moments, full of emotion and passion. Through your participation you share universality with the sailors gathered here – all with one goal in mind – sporting excellence.

“But consider the second goal, to have fun. Whilst you are out on the water contesting titles and on shore preparing for the races and spending time with your fellow sailors, remember to enjoy the fun of sailing. This is the beginning of a lifelong friendship, and also marks the understanding of different cultures and acts as a firm platform for us all to move forward as one family.

“Whilst contesting the Asian and Oceanian titles, remember that it takes more than crossing the finishing line to make a champion. A champion is more than a winner. A champion is someone who respects the rules, rejects doping and competes in the spirit of fair play.”

Oman was awarded the Optimist Asian & Oceanian Championship by IODA in 2017 following a vote by 28 regional members of the international organisation.

Oman Sail CEO David Graham said: “Many Olympians and medallists have sailed in these waters, dreams have come true in these waters, and to have another prestigious international event here, where dreams will be realised again, at this wonderful facility in Al Mussanah, is an honour for us.”

Speaking directly to the 141 Optimist sailors he added: “Your sailing careers are at the very start and you are on a great path. A very high percentage of the sailors in the America’s Cup, Olympics, the Ocean Race, gained their base skills in the Optimist class.

“If I asked how many of you have Olympic dreams I am confident close to, if not 141, hands will go up. It’s why Oman has a big fleet of Optimists and a growing squad of Omani boys and girls sailing them – they are joining you on your pursuit of a full and active life in which sailing is a big part with the Olympics firmly on their radar.”

Highlighting the support of Oman’s ministries of Sport and Tourism, the Diwan and the Mussanah Millennium Resort, Rashid Al Kindi, Oman Sail’s Acting Director of Sailing, said: “We are delighted to welcome so many world-class Optimist sailors to Oman and we are all looking forward to a week of challenging and competitive racing in a fair and friendly environment.

“Mussanah Sports City has fantastic facilities and we have a marvellous team of race officers and officials on hand who will ensure great racing out on the water. It is a not to be missed opportunity for all the sailors to demonstrate their skills and determination.”

Following the opening ceremony, the sailors and their teams got a chance to experience Omani culture, food and traditional dancing, camel riding, and henna, an opportunity to make new friends from different cultures.

Racing at the 2019 Asian and Oceanian Championship begins on Wednesday 2 October and continues until Sunday 6 October.